Demand in China for British made products

Join this session to find out about demand in China for British made products and how to successfully bring these to market.

Since China began to open up and reform its economy in 1978, GDP growth has averaged almost 10 percent a year, and more than 800 million people have been lifted out of poverty. Its growth in 2021 was 8.1 percent.  Its population is 1.4 billion.

In 2021, UK exports to China amounted to £27 billion, a 3% increase since 2020, making China the UK’s 3rd largest trading partner, accounting for 7.3% of total UK trade. Appetite for UK goods and services continuing to grow and develop, despite the challenges presented by the pandemic. Despite abundant opportunities, however, divergent standards and regulations, IP concerns, the complexity of routes to market and, increasingly, China’s unique digital ecosystem have meant that accessing these remains daunting for many companies who could be benefiting from exporting to the world’s largest single consumer market.

This is why the UK’s Department for International Trade has its single largest in-country team based in China, with over 200 staff, across multiple cities.

The lead of that team, Her Majesty’s Trade Commissioner for China, John Edwards, will dial in from Beijing to speak exclusively with Made in Britain members about topics including:

> What demand is in China for British made products

> How to access that demand, including the following considerations:

> What support is available from DIT and partners

Please email any questions you may have in advance, or subjects you would like to be covered, to trade@madeinbritain.org.

The session will be facilitated by George Middleton, Principal Consultant at MAP Ltd and Advisor to Made in Britain.

Who is the session designed for?

Made in Britain members interested in starting to export to China

Made in Britain members currently exporting to China 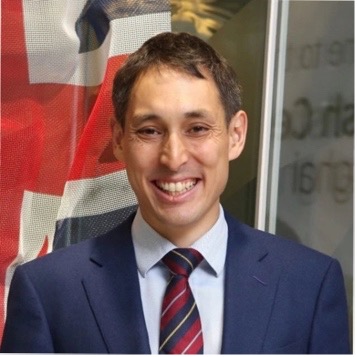 John Edwards took up his position as HMTC for China in May 2020.  He is based in the UK Embassy in Beijing. John has been with the Foreign and Commonwealth since 1996. Following a period of Mandarin language training at the University of Westminster and Beijing Normal University, he worked as Consul Political, Economic and Press at the British Consulate General Shanghai from 2000 to 2003. John then spent four years in London - between 2003 and 2004 as the Head of Human Rights Policy and Projects, between 2004 and 2005 as the Head of Consular Policy, and between 2005 and 2007 as the Foreign Secretary’s Speechwriter.

John was Deputy Consul General at the British Consulate General Jerusalem from 2008 to 2012. He returned to China in 2012, and worked at the British Embassy for four years as Minister Counselor (Prosperity) with the overall responsibility for UK-China policy collaboration on climate change, urbanisation, energy and healthcare, along with strategic oversight of the science and innovation network. The session will be facilitated by George Middleton (left) of MAP, Advisor to Made in Britain on government and international trade.

George has been supporting UK companies to develop business with the government and internationally for more than 10 years, now as a consultant at MAP UK & International Ltd.  George works with a growing, global network of associates and partners.  He lived and worked overseas between 2011-18 but is now UK-based.

MAP is contracted by Made in Britain to develop the organisation’s links with the UK government, as well as its export and international trade offer to members.

By Made in Britain 2 weeks ago | Member events