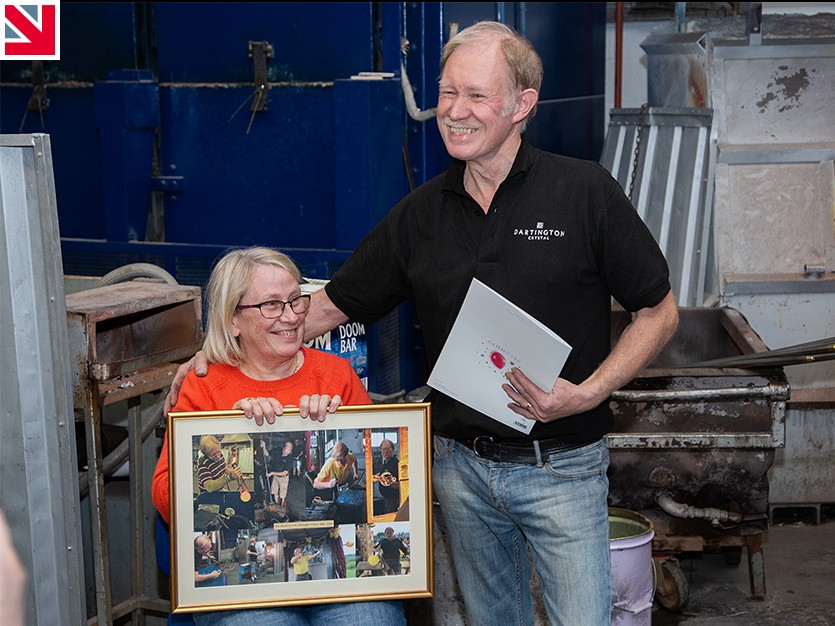 Master Glass Blower, Brian Cooke, was just 15 years old when he joined the Dartington team in August 1969. On Friday, March 15th, he celebrated his final day at the Torrington factory.

Over the next few decades, he became one of the most experienced craftsmen in the factory and went on to share his hand-craft skills with younger members of the team.

Brian’s retirement was celebrated at a presentation held in the blowing room at the Dartington Crystal factory, alongside his wife, Helen. The presentation was attended by his colleagues from across the Company, some of whom he has worked with for over 40 years.

Brian was presented with several gifts that highlighted both his career and his love of whisky and ale. Among the gifts was a set of whiskey tumblers engraved with the faces of some of his closest colleagues and a collage of photos taken throughout his time at Dartington. It was titled, ‘The Master at Work 1969 – 2019’.

His commitment was recognised in a speech from Director, Alan Ramsay who said: “On behalf of the company, and everyone past and present, I would like to thank Brian sincerely for everything. It is an honour to share this huge achievement and celebrate his valued and continued contribution to the business.  It goes without saying that he will be very much missed, particularly in the factory. We wish Brian all the very best with everything he does in the future.”