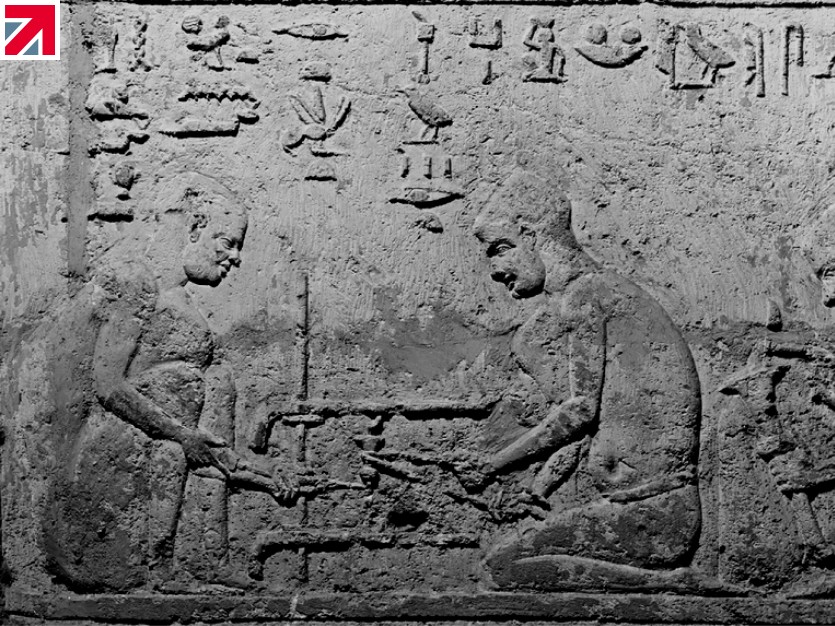 Summary
Metal Spinning is a craft that can be traced back thousands of years and was heavily used since the dawn of civilization. The earliest known pictorial evidence can be traced to the 4th century tombs of the Egyptian Pharoah Petosiris from the early Ptolemaic period.

Illustrations show two men operating an ancient lathe. The lathe itself was very limited with wood, held in pivots, rotated by hand as it was Sanded. Literary evidence highlights further development within lathe work with the introduction of a ‘bow’. Egyptians would use these bows for spinning stone, metals such as copper, and wood.

Similar developments within this early technology could be found further east. Ancient Chinese and Indian craftsman were adept in lathe working skills with the use of hand bows for spinning, and even spinning wheels. Material evidence is difficult to find however, with many of the tools and materials that were used unable to survive to the present day. Literature however, paints a clear picture of spinning as a familiar technique used across the globe.

Early Technology – Primitive Spinning Lathes
Egyptians were thought to have used two wooden posts which were positioned horizontally to serve as a mount for a spindle. A rope, looped around the spindle, would provide movement in either a clockwise or anticlockwise direction.

From there, the workpiece would be attached to the spindle, and whilst one craftsman operated the spindle movement, the other would chisel at the workpiece as it rotated. There is some controversy with the depicted images found within the tomb of Pharoah Petosiris which shows the wooden posts positioned in a vertical position. The vertical alignment could be a simple depiction or show the early lathe’s actual design.

In the carvings, the operator can be seen using a wooden pole to turn the spindle but this would later be replaced with a ‘bow’ as more efficient practices were developed. This would make turning the spindle easier and more fluid to machine commonly used materials such as wood, amber, bronze and stone.

Later Developments – The Introduction Of A ‘Pedal’
The Middle Ages saw further advancements in spinning and lathe working technology which primarily focused on the ability to continuously rotate materials. The bow eventually became an unnecessary tool and instead was replaced with a pedal.

The advantages of a pedal as opposed to a bow, enabled the craftsman to free up his hands. Using their feet, they could manage the speed of rotation and at the same time, gain a better focus on accuracy and precision.

Naturally, the development of these lathes meant they were more compact than their earlier predecessors. They were often depicted as small desk-shaped work stations for machining projects. To operate these lathes, the operator would work the foot treadle to rotate a large fly wheel. Resetting the action of the treadle enabled the operator to push down on it as a continuous action.

Unfortunately Vikings, amongst other societies, did not develop the continuous action until later years. They did however use a similar pedal-driven lathe for their metalwork.

These had a slight disadvantage to continuous action lathes. Poles were instead used to reset the treadle, and because of the reversal of the rotation direction that this activity caused, it meant the operator could only chisel during one motion. Pole-lathes were however common and easy to produce and were even used in the 20th Century!

As denser materials were used more often, further developments were made to produce Iron lathers which would often vary in size. Iron lathes could produce much finer, artisan works such as clocks and intricate watch parts for example.

Metal Spinning During The Industrial Revolution
Fuelled by steam power, which served as a game-changer for manufacturing in Britain, the industrial revolution began and spread to the rest of the world. It was also during this era that further advancements in Metal Spinning technology began.

In 1833, the Factory Act was introduced, thereby enforcing the cap of working hours for child labor during the 19th Century. It set a standard within the factory and played an important role in driving innovation. Manufacturers and Machinists alike were forced to pursue ways of reducing human input. This resulted in the introduction of automation.

Motorized Metal Spinning lathes were introduced on an industrial scale which improved the Rotations per Minute (Rpm) much more rapidly. Tooling was developed to withstand the increased pressure as a result of a higher velocity process. They also help speed up the forming process too!

There were many noticeable advantages with the new motorized lathe, which included improvements to the accuracy of spinning projects, as well as production volume. They still however, required large supervision from the operator to ensure schedules were met and stock fulfilled.

The Rise Of CNC Metal Spinning
The introduction of digital technology in the 1960’s and 70’s helped pave the way for numerically controlled (NC) machines similar to those we now use today; CNC (Computer Numerically Controlled) machinery.

NC technology was originally invented by John T. Parson in the 40’s working closely with the MIT (Massachusetts Institute of Technology) which was later commissioned by the United States Air Force. It helped provide a much more cost effective way to manufacture parts for aircraft, especially those with intricate geometries. Within industry, this technology eventually became standard.

However, advancements didn’t end there as we all know. In 1967, computer-controlled machinery began to be explored as a further concept. Computer Aided Design (CAD) and Computer Aided Machining (CAM) marked prominent developments within CNC machinery in as early as 1972. And by 1989, these new CNC machines set a new standard within industry. But what were the differences between NC and CNC?

The original NC machines were controlled by cards that had a set of codes to program them, which were called G-Codes. They provided machinery with positioning instructions. The issue with these lathes however, was due to the hardwiring, which made it impossible for the operator to change the pre-set parameters.

CNC technology resolved this issue by designing, conducting and controlling these codes through computer systems instead. In modern day technology, these codes have been combined with logical commands to enable the operator to make adjustments in real time.

Naturally, human interaction is greatly decreased and the number of human errors that occur have subsequently dropped. It’s not unheard of for larger organizations to leave CNC machinery running 24/7 in order to complete huge production runs. Software has developed CNC lathes to stop and alert the operator should a fault occur during a production run.

What’s Next For Metal Spinning Technology?
The fourth industrial revolution is starting to take hold within industry as manufacturers search for more ways to improve their operations. The idea that devices, connected to the internet, all collecting and sharing data is considered extremely beneficial.

By enabling devices to communicate real-real time data without involving a human being, it will unlock a much more smarter, more responsive way of Metal Spinning.

Conclusion
Metal Spinning has developed through the thousands of years of human civilisation. It is a craft, routed within industry with an incredible history impacting life on a global scale. From intricate jewellery and armour to now supplying the world with amazing designs.

The potential for Metal Spinning is only now being realised as boundaries are pushed further as technology advances. In the next couple of decades, we could very well return to this article to explore how far we have advanced in manufacturing.

Your Next Project
As a leading expert in the field of Metal Spinning, and the leading organization in the UK Metal Spinning Industry, Excell’s services have been widely sought after worldwide. With the vast skills and knowledge required, we can ensure quality products are delivered on time and to your requirements!