Engineering a career, from apprentice to lead panel wireman 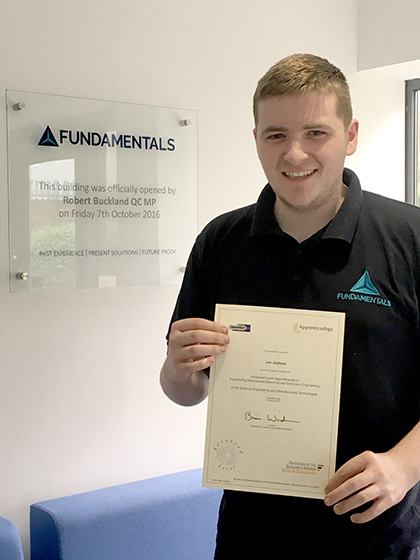 Joe Jackson (left) tells us about his career journey with Fundamentals, from Engineering Apprentice to Lead Panel Wireman, and his aspirations for the future.

What made you want to get into engineering and why Fundamentals particularly?

I have always been involved in engineering right from an early age; I had engineering influences in my family it was seen to be a definite choice. Upon leaving secondary school I studied engineering at Swindon College. It was there where I encountered Fundamentals as they contacted the college looking for an apprentice. Studying both electrical and mechanical engineering units, I thought it was definitely a great opportunity. This did cause a bit of competition between several of my classmates, however, I was fortunate to get an interview which then progressed to work experience. On my work experience I found I liked the work involved which was very different from the classroom. There was a great sense of camaraderie amongst the teams and I saw people taking pride in their work. So, when I was offered the role, I would have been a fool to turn it down.

What did you study at college and how long for?

Before Fundamentals I was studying a BTEC Level 3 extended diploma in engineering. When I became part of Fundamentals, the company put me through a Level 3 Advanced Apprenticeship which comprised of a Level 2 PEO (Performing Engineering Operations) for an academic year and afterwards a level 3 NVQ lasting for two academic years. Once I completed this, Fundamentals funded me to do a two year HNC (Higher National Certificate) in general engineering, this had both electrical and mechanical units which had relevance to the activities I did in my normal job role. Upon completing my HNC, I was encouraged by my management to produce my HNC project, which at the time was just a design only project. The project in question consisted of designing a piece of equipment which could move AVC panels around the workshop whilst considerably reducing the amount of manual handling needed. Roughly about six months later my project which consisted of a bespoke pump truck married with a specially manufactured cradle was manufactured, and it works really well!

How long have you been at Fundamentals and what is your career journey to date?

I have been at Fundamentals for just over seven years now. I started out as a Production Apprentice, which involved me jumping between two production departments. I worked in the product manufacturing department assisting in the development of our own in-house control relays and in the panel workshop, in which we took our in-house relays and installed them into control panels which are then sent to the various substations where refurbishment work is taking place.

Once completing my apprenticeship, I stayed in the panel workshop and became a Panel Wireman. As a Panel Wireman, I was involved in numerous company projects which included product redesigns, new specifications, and projects for new customers. At the tail end of 2020, I was promoted to Lead Panel Wireman which is where my career path is at this moment.

What is your current role at Fundamentals and what does this involve?

I am currently Lead Panel wireman at Fundamentals. I have been in this position since the end of 2020. The main responsibilities of this role are to wire our control panels and gear plates, to be a deputy to the team leader and to assist him with any queries or tasks that come his way. I have also trained a number of new members of staff to show them the quality and standards that we work to. Other responsibilities which include doing the COSHH (Control of Substances that are Hazardous to Health) risk assessments that are used in the Swindon office and also when it is audit time, I help wherever I can. I am a member of several company committees, such as the Environment and Quality Committee.

What are your career aspirations at Fundamentals?

The thing I like most about Fundamentals is numerous career opportunities the company provides. There are technical roles in our development, application and design teams but also there is also scope to progress further in my current department. The main thing for me is that I want to use what I have learnt from both the classroom and the workplace to its full potential. It is definitely an area I’m on the fence about and I will probably address it when the opportunities arise.