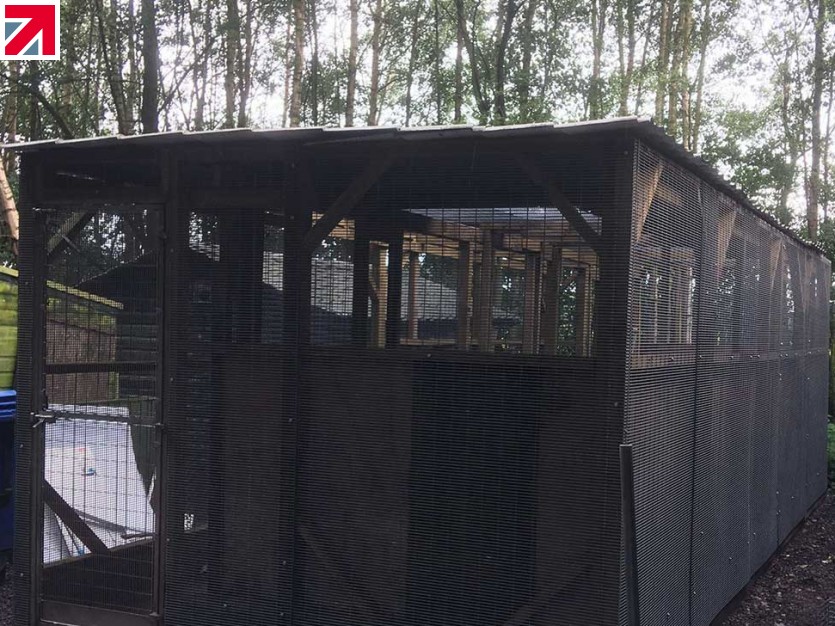 During a time of great uncertainty and negativity Neil Hughes, System Channel Manager at Abloy UK, decided to use his time on Furlough as a positive thing, starting off by manufacturing bird boxes for a local community project giving page. Neil was then encouraged to volunteer at Lower Moss Wood Wildlife Hospital, ran by Ray Jackson MBE and asked if he could build an aviary for larger birds such as buzzards so they could free up space in the hospital.

Once completed Neil then moved on to designing and manufacturing an enclosure for ducks and ducklings, which also required to be vermin proof due to the local rat population.

Neil’s design featured a concrete base (supplied for free by RT Mycock and Sons) and 50 sheets of HiSec 358 mesh (supplied for free by Zaun). Lower Moss Wood Wildlife Protecting Injured Birds, Lower Moss Wood is an educational reserve and wildlife hospital, founded in 1989, provides a place for schools, disabled visitors and environmental groups to visit, enjoy the countryside and learn about conservation and the environment.

They also provide a place where injured animals and birds can recover and rehabilitate before returning to the wild. Lower Moss Wood has given more than 50,000 children and adults an insight into the great outdoors and the hospital admits around 2000 wildlife casualties per year. which can be anything from an injured fox or badger to an orphaned hedgehog or fledgeling bird.

During a difficult time, Neil’s positivity and proactive attitude have ensured the hospital and wildlife sanctuary can continue to look after these animals for years to come. Well done Neil for protecting injured birds by using your own time to create something positive.

Neil said “When Ray first gave me the task to make a vermin-proof duck enclosure Zaun fencing came straight to mind as I knew they could at least advise. When I first spoke to Alastair Henman MD and explained what I was doing what I was after he had no hesitation offering the ex-hire stock for such a worthy cause. A couple of other calls and we had it delivered in a couple of days Myself, Ray and staff at Lower Moss cannot than Zaun fencing and their staff for the generous contribution.”