The Times features 91-year-old Made in Britain member

DEREK Price is 91 years old and has no intention of retiring. Mr Price has been making tennis balls for 77 years, after joining Price of Bath, the company formed by his father, in 1945. He has been managing director since 1959 and has steered the company through the toughest trading conditions.

Price of Bath is a member of Made in Britain and it was through this connection that Derek Price caught the eye of a writer for The Times. Subscribers to The Times online publication can read the article here.

“In our heyday, we were doing 72,000 balls a week and employed around 100 people, but most of our business was lost to the far east in the late-eighties — to China, South Korea and Vietnam. We couldn’t compete on volume or price,” Mr Price told Times writer Andrew Saunders. But some of those lost customers are now coming back thanks to rising shipping costs and global disruption. Production is going up and the company is soon to move into a new factory.

“We still had all the old equipment from when we were doing larger volumes. It just needed modernising. Tennis ball machinery isn’t like a lathe or a milling machine; you can’t buy it off the shelf,” said Mr Price. 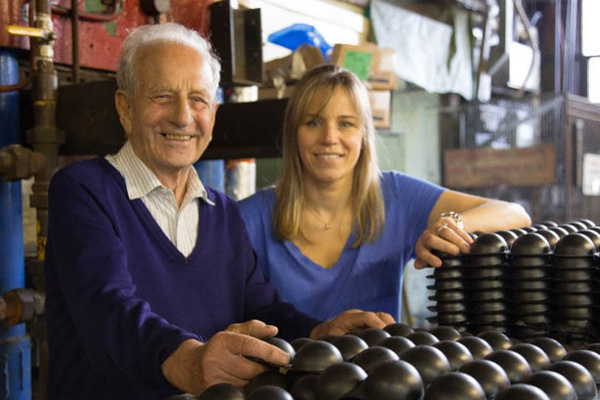 And Derek Price has no fear of modern technology. In fact, he has braced the digital revolution. As his daughter Louise, also a director at Price of Bath, said, “Dad’s the one who is on Google Analytics at night, and then in the morning he’ll give us a five-page report on our SEO performance.”

Product development is part of the proposition. “If anybody wants something new developing to do with a ball they come to us," Mr Price told the man from The Times. "The big companies aren’t interested in developing new products. They want big volumes.” Using recycled materials to make new tennis balls is one ambition.

When asked if he ever plans to retire, Mr Price said, “I don’t understand why people retire, really. I’ve got to have something to do, and some problems to solve. You spend most of your life learning, and then you’re supposed to just pack it in. What’s the point of that?”

PHOTO: Derek Price with his daughter Louise, a director at Price of Bath