Demand in China for British made products 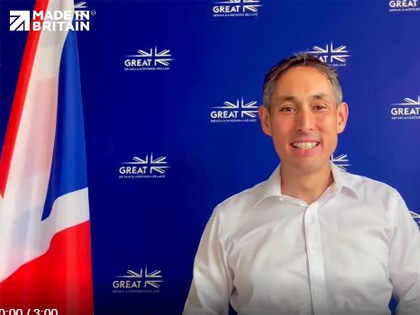 ON 15 June 2022 Her Majesty’s Trade Commissioner for China, John Edwards (left), dialled in from Beijing to speak exclusively with Made in Britain members about demand in China for British made products.

Made in Britain members can watch a recording of the session here (requires member login). For a copy of John’s slides, please email: trade@madeinbritain.org.

Since China began to open up and reform its economy in 1978, GDP growth has averaged almost 10 per cent a year, and more than 800 million people have been lifted out of poverty. Its growth in 2021 was 8.1 per cent. Its population is now 1.4 billion.

By 2030, China and Hong Kong will have 33 per cent of the world’s middle-class consumers.

John highlighted the demand for British-made products in a range of sectors, particularly:

In 2021, total UK exports to China amounted to £27 billion, a 3 per cent increase since 2020, making China the UK’s third-largest trading partner, accounting for 7.3 per cent of total UK trade. John underlined the appetite for UK goods and services continues to grow and develop, despite the challenges presented by the pandemic. He shared the names of a number of UK companies successfully exporting to China.

With China’s abundant opportunities, however, come divergent standards and regulations, IP concerns, complex routes to market and China’s unique digital ecosystem. These all mean that accessing opportunities remains daunting for many companies who could be benefiting from exporting to the world’s largest single consumer market.

John leads a DIT China team of 200, across multiple cities. It is the single largest in-country DIT team anywhere in the world and is committed to supporting UK exporters.

Made in Britain members taking advantage of the opportunity to put questions to - and make connections with - John and his team in China included UK manufacturers of:

The session was opened by John Pearce, CEO at Made in Britain. It was organised and facilitated by George Middleton, principal consultant at MAP and advisor to Made in Britain on government and international trade.

The session is part of Made in Britain’s International Trade Programme.

For more details on China, Made in Britain’s International Trade Programme or to contact George, please email: trade@madeinbritain.org.

By Made in Britain 2 days ago | International trade: exports and imports