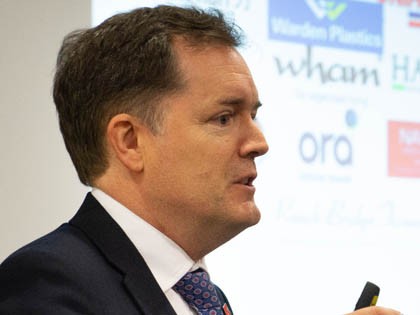 THE achievement of members was the theme running through a keynote speech from Made in Britain CEO John Pearce (left) at the SME Growth Summit, part of this year’s Digital Manufacturing Week at the Exhibition Centre, Liverpool.

The session's focus was on how SME and larger manufacturers can take advantage of government support and funding available to help them grow through digitising their businesses, and to manage the growing threats to all data management and digital environments. John Pearce discussed evolution and growth in the post-Brexit, post-pandemic economy and highlighted the opportunities for SME growth and innovation as British manufacturing enters a new era.

He started local to the event with the Merseyside Fire and Rescue Service, which is upgrading its communications system in line with the government’s plans to implement a new nationwide Emergency Services Network, known as ESN. It will transmit fast, safe and secure voice, video and data across the 4G network to first responders on the frontline.

Wirral-based Made in Britain member Sure Antennas has developed the ESN-ready ‘Mallard’ antenna which is already in use in Merseyside and is working with the fire service to develop and test new devices as the ESN programme progresses.

Mr Pearce then went on to highlight the work of members helping solve the working from home challenge. Recyclable-pallet maker Pallitte developed an entirely new pop-up desk product to give practical help to the thousands of people suddenly working from their front rooms or under the stairs. Assembled in seconds, light as a feather and environmentally-friendly and affordable for everyone, he said, and made here – much closer to where it is needed.

Engineering supply firm Heap & Partners has been making valves for more than 150 years - but has shown that a company is never too old to evolve and embrace the new. Founded back in 1866, the company is now introducing QR codes and cloud-based technology into manufacturing processes taking the first steps towards full digitisation efficiency. It’s a move that Heap & Partners believes will accelerate its sustainable growth plans and create more jobs.

Rounding off his speech, Mr Pearce made reference to the annual survey conducted by his organisation: “One of the positives to be gained following more than a year and a half of uncertainty, is being compelled to look at what we actually do make here in Britain. Our research shows that the majority of both consumers and SMEs are now more likely to buy British goods than before the pandemic, eight in ten businesses and consumers would happily pay more for products made in this country, while two-fifths of consumers and two-fifths of businesses would prefer to buy British regardless of the cost. Britain’s manufacturing sector has a long-held reputation for quality, reliability and innovation.”