A national survey commissioned by Van Guard, a market-leading British manufacturer of commercial vehicle accessories, has revealed that 97% of van drivers who responded said they were more likely to buy a van accessory if it was manufactured in the UK. Not only that, but 92% said that buying British is somewhat or highly important to them.

The survey, which targeted over 2,500 van drivers in the UK, also highlighted that over 95% of those questioned associated British-made products with high quality, and 96% would choose British-manufactured van accessories over those made overseas. It also discovered that most (around 93%) believed it was highly or somewhat important that consumers supported British manufactured products generally. Manufacturing currently contributes £6.7tr to the global economy, makes up 11% of UK GVA and 54% of UK exports. It also directly employs 2.6 million people, and so the survey results are particularly encouraging.

Van Guard’s Managing Director, Barry Woodward, comments: “We undertook the survey for a number of reasons, the main one being to sense check whether we were right to believe trades people were really behind British-manufactured products. The response has been overwhelmingly positive in its support of British manufacturing, which is really encouraging and it has certainly helped to validate our thoughts. We are really proud to be waving the flag for British manufacturing and commend van drivers for supporting the UK economy by buying British.”

Following the results of the poll, Van Guard states it will be doing even more to communicate that its products, including the ULTI Bar – one of the UK’s best-selling roof bar products – is manufactured from its state-of-the-art manufacturing plant in Exeter, Devon.

Barry continues: “In 2014, we undertook the process of reshoring an element of our manufacturing back to the UK, and at the same time we also significantly increased our design, production and manufacturing capabilities through the addition of a new BySprint 3kW Fiber laser cutter. Our investment in the laser cutter marks an exciting chapter as it gives us the ability to increase output dramatically and deliver bespoke orders quicker. It was also a way of future-proofing out business and look forward to the exciting developments in the pipeline.”

In recognition of Van Guard’s 25-year history as a British manufacturer and substantial investment in new leading-edge machinery, Van Guard has joined the Made in Britain campaign.

Amanda Nelson, one of the Made in Britain campaign’s founding Directors, comments: “We were delighted to award our marque to Van Guard. We share Van Guard’s vision to reinvigorate British manufacturing, bringing jobs back to the British Isles and building a greater legacy for Britain’s manufacturing future.” 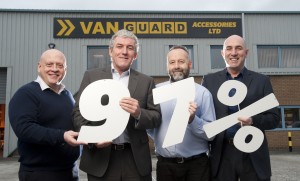