Steel prices - what changes can we expect? 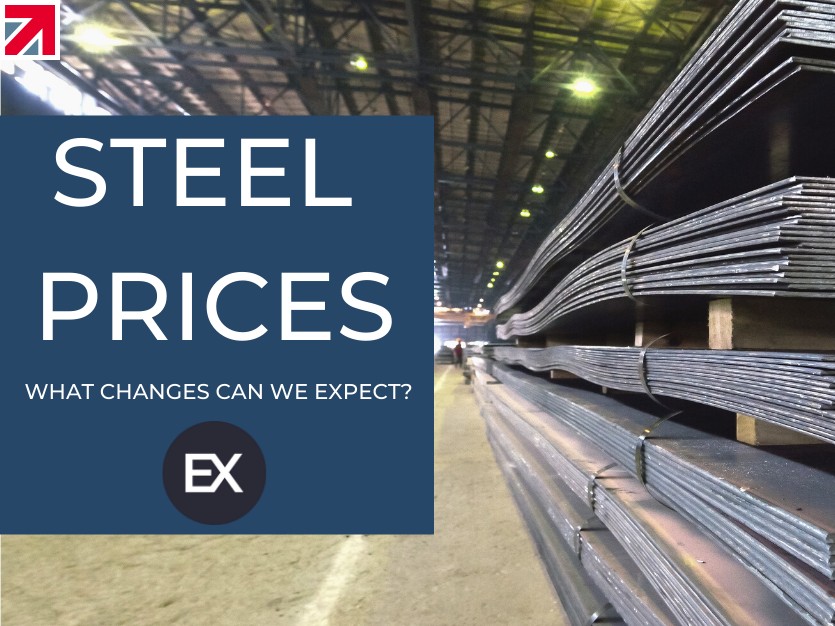 IT has been six months since Excell Metal Spinning looked into three reasons why steel prices are so high and on the back of the pandemic and increased demand, raw material prices have soared. Many organisations, including Excell, have been victims of the huge hike in steel prices, much to the dismay of consumers worldwide.

Over the past six months, we saw steel prices increase from as low as 50 per cent, and in some cases, as much as 500 per cent. This undoubtedly put a strain on supply chains across the industry, especially in UK manufacturing which was already being hit by the pandemic, surging transport costs and Brexit.

There has been a deepening conversation on the future of steel prices which we will explore more of in this post.

What the experts are saying

Presently, industry experts predict steel prices have reached their peak and are expected to moderate in the weeks and months to come, that’s according to The Fabricator which rightly points out “Look what happened to lumber”.

In June, lumber prices had fallen by 40 per cent so can we expect the same for steel? Steel Market Updates (SMU) have indicated a fall in steel prices for the first time in a year. Although, only a $5 dip to an average of $1950/ton in hot-rolled steel, it comes during a pivotal moment for UK industries, particularly in manufacturing and construction.

Much can be said for cold-rolled steel prices which have also recently begun to flatline. Something, we have noticed in our procurement of certain grades of sheet steel. So what are industry leaders predicting in the next few months?

SMU surveyed consumers of steel and identified that 80 per cent of those surveyed believe hot-rolled steel prices have already peaked or will peak within $50 of the current average before December this year. Usually, cold-rolled steel isn’t far behind hot-rolled price trends.

These price increases were spurred on by multiple COVID-related shutdowns and trillions spent by governments, particularly within vaccinations that enabled people to get back to work. This resulted in a surging demand for steel as more people and businesses resumed operations,  quadrupling the price to levels not seen before.

What’s happening in the UK?

An argument has been presented that domestic mills, which have taken steps to restrain supplies and elevate prices, have opened themselves to emerging competition from imports.

The UK government had intended to scrap quotas that were designed to curb imports which was reported by Reuters, much to the fury of the British steel industry. As the Guardian reports, the director-general of the industry lobby group UK Steel said this move was “utter madness”.

However, in late June Reuters reported a slight reversal from the government on this move by launching a temporary extension on a further five of the 19 steel products for one year. Tariffs of 25 per cent would still remain on these imports, but the UK steel industry, which generates about $2 billion in turnover each year, warned against the removal of any of the EU’s so-called safeguard measures.

The UK currently imports around 5.3 million tonnes of steel, and exports 4.4 million tonnes according to a House of Commons report on the UK steel industry. Imports of steel were worth £4.5 billion in 2020, down 29 per cent from 2019, whilst exports of steel were worth £3.7 billion, down 10 per cent from 2019. Seventy-four per cent of UK steel imports came from the EU in 2020, whilst 53 per cent of UK exports head to the EU. With difficulties in policies on the back of Brexit, the HGV driver shortages and surging transport costs, it has been a difficult year for the industry.

There are a number of indicators to look out for when analyzing the steel prices for this year, however.

The SMU has been keeping an eye on the lead times for the delivery of spot orders from mills. The general rule of thumb indicates that longer lead times equates to busy mills processing orders. More often than not, mills will charge higher depending on how busy they are as a result of demand.

Mills will usually provide a lead time of four to five weeks, however, during this year, this increased to eleven weeks. This is a great indicator to look for and helps explain the surge in steel prices however it’s not all bad news. SMU reported that these lead times began to drop in August, with hot-rolled steel falling to nine-week lead times. Should this continue to drop, it will serve as a great indicator of any potential price drops.

Steel prices are overdue to be corrected according to the CRU, the parent company of SMU. They indicate service centres are now beginning to report inventory balanced with outbound shipments, another indicator of weaker demand from distribution centres.

It also arrives during the time of year where planned shutdowns for maintenance are a common occurrence, which will ensure a tight supply of steel. Although, it is argued that seasonal demand and the increasing imports will drive down steel prices as the CRU predicts.

There is a cause for concern

The recent Financial Times report on the surging power prices impacting British Steel, offers cause for concern. British Steel has warned spiralling costs in power prices are now making it impossible to produce profitably at certain times of the day.

Steelmaking is an energy-intensive process with electricity representing 20 per cent of the cost to produce steel from raw material. UK Steel indicated that some operations have come to a standstill for limited periods at peak times.

British Steel revealed they are quoted up to £2,500 per megawatt-hour! That’s in comparison to the average rate of £50/MWh in April this year. The energy market is clearly one that is malfunctioning, and despite a global market where steel is strong, “it is now uneconomical to produce steel at certain times in the UK” ~ Gareth Stace, UK Steel.

The implications of steel production halting to a stop are concerning and could very well impact steel prices in the next weeks and months across the UK. However, one analyst explains this problem should not be a permanent issue.

If industry experts are correct, we can assume that the worst of the unprecedented price hikes in steel are now behind us. Although there is still a long road to go before we see prices resume to their levels before the pandemic, industry and consumers can be optimistic for the future.

With demand slowly falling with seasonality, and a steady influx of imports, UK manufacturers should see prices begin to fall by the end of 2021. However, all eyes are now on surging energy costs and a period of time where maintenance shutdowns will undoubtedly impact how quick steel prices fall. We can only tighten our belts and see what the rest of this year holds for us.